On Saturday, two squads from Ashley Hill went to Union Mills FC to take part in the annual Millennium Trophy tournament. The tournament is always an exciting event in our school sporting calendar and this year's event turned out to be no different. It was the first time that the school put two squads into the tournament and both did extremely well. Our 'B' team performed fantastically well to finish 4th in their group. Despite facing some challenging opponents the boys can hold their heads high as they came together well as a team and put in some excellent performances.

The 'A' team had high hopes from the outset and it was no surprise to see them comfortably win their group, scoring some outstanding goals along the way without conceding any. This took them through to the knock-out stages which are always nerve-wracking affairs. Wins in the quarter and semi-finals meant an appearance in the finals in a local derby versus Onchan. All the squad members performed fantastically well but, by the end of extra time, nothing could split the sides. Sadly, Ashley Hill lost the penalty shoot-out but can be extraordinarily proud of their achievement. They defended resolutely throughout and scored some wonderful team goals during the matches. Most impressively, both squads represented the school in a way they can be truly proud of. Congratulations to Onchan Primary School.

All players performed extremely well, but we were particularly pleased to see that George Kearns won the overall player of the tournament award - thoroughly deserved too. Well done to everyone involved! 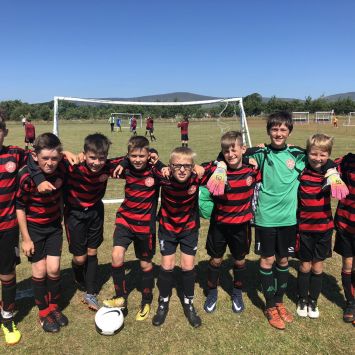